I’ve been working on a project named Gadget (as in Gadget Hackwrench) for about 3 months now, and I’ve just decided I’ll keep a sort of logbook on this blog (“blogbook”?) to keep myself motivated and share the progress on it.

The original idea was to write a toy physics engine from scratch, but then I realized I needed some sort of visual representation of what was going to happen, so I started coding a rendering engine instead. After all, it’s a great opportunity to learn some graphics programming and more specifically, OpenGL.

If you’re interested, you can find its source code here.

Tools of the trade

As this project is for fun, I definitely didn’t want C++. But at the same time I wanted to be able to use the OpenGL API as faithfully as possible, so I chose D. It’s a great programming language, it makes programming fun and productive and its OpenGL bindings are so thin that you could literally copy-paste the API calls in a C program and they would work (most of the time at least. There are a couple of differences mainly due to how C and D treat arrays differently).

I use a library called DerelictGL3 and OpenGL version 3.3 core. This choice is due to the fact I’m still learning OpenGL, so I’m doing heavy use of the Learn OpenGL tutorial and it happens to use that version. Also, mobile compatibility isn’t an issue, so for now I’m not bothering with GLES (but I believe it would be quite similar to 3.3 core).

I’m using SFML as the windowing library (as opposed to the more commonly used GLEW) because I’m already very familiar with it, as it’s the main library I use in Lifish. The D bindings are again provided by DerelictSFML. Unfortunately, they are actually bindings to the CSFML API, so they’re totally C-style and non-object oriented (so you write auto t = sfClock_getElapsedTime(clock); instead of auto t = clock.getElapsedTime();), but that’s not necessarily a bad thing. It keeps things simple and doesn’t add uncalled-for abstractions I don’t need. Moreover, SFML is used quite little in Gadget, so the resulting C++-bound-to-C-looking code does not bloat the codebase excessively.

The last ingredient is a helper library for linear algebra. Gl3n is more or less the equivalent of Glm for D, and it does a great job with vectors, matrices, transformations and so on. There are a couple of issues I don’t quite appreciate of it, like the lack of operator overloading for vectors and the reverse row ordering of matrices compared to OpenGL, but they’re definitely not problematic.

With the dependencies set up, my first goal was to get anything on screen. This step is tougher than you may expect in OpenGL 3, as you need to perform at least the following steps:

It is scientifically proven that 99% of the first OpenGL programs anyone writes will attempt to draw a triangle. For some reason, I drew a rectangle instead. It’s a very fulfilling moment when you actually get one to display. 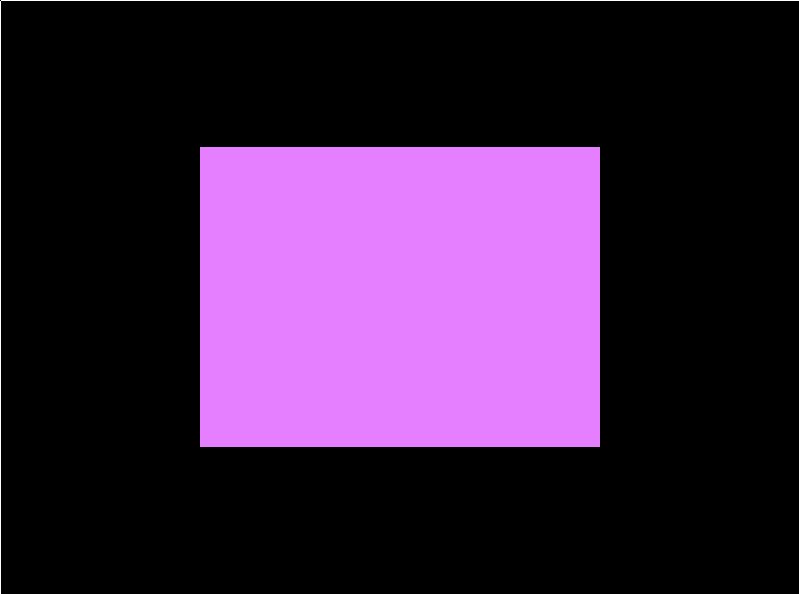 Naturally, once you get it this far, only the sky’s the limit. The next step I took was to draw a slightly more interesting shape: a cube. Also, to properly appreciate the fact that a cube has 3 dimensions, I added a FPS-like camera to be able to move around in the world. That’s cool, right? Once you have a camera (and the proper shaders), you’re suddenly no longer limited to a boring fixed 2D screen, but you get an entire infinite 3D world instead!

Building a first person camera is not hard, you just have to apply some extra mathematical transformation to the vertices and bind their parameters to the mouse and keyboard events.

Together with the camera, I replaced the “hello world” shaders with something a bit more evolved which could apply actual lighting to the shapes drawn on screen. The vertex shader now makes the vertices look like in 3D, while the fragment shader fakes a point light rotating around the shapes. I used the Blinn-Phong shading model.

It already feels like a “world” we can move into! Changing the background color also helps making it feel like a “sky”.

I also wanted to visualize the light’s position, so I added a separate shader that drew a billboarded quad there. This shader was the first to use a geometry shader to create vertices on-the-fly around the light’s position to draw a quad out of a single point.

This addition makes life easier when debugging light-related stuff, so I thought it was best to have early on.

Keeping in mind that my final goal is to use this “rendering engine” to visualize the result of the forthcoming physics engine, one of Gadget’s basic requirements is to be able to render a very high number of objects at the same time.

For this reason, I decided to implement instanced rendering right away. Instancing is, more or less, the process of drawing multiple versions of the same object “at once”, without explicitly storing a separate vertex buffer for each. It complicates things a bit, as all shaders that work in an instanced fashion need to be rewritten (e.g. to pass the model matrix as a vertex attribute rather than an uniform), but once you set up the machinery, it gets pretty simple to build upon it.

To make the world a little more “concrete” I’m now drawing a huge quad to serve as a “ground”. Notice that all cubes, as well as the ground, have their own correct Blinn-Phong shading and are stretched and rotated in different ways despite sharing a single vertex buffer for their basic geometry. Instancing rocks!

For now I’m wrapping this post up, lest it gets too long. Part 2 will deal with multiple light casters, shadow mapping and other neat stuff. A lot of code changes from now on are actually invisible, as they deal with the internal architecture of the code, but I think I’ll cover at least some of them anyway.

In part 3 I will probably reach the lastest progress I’ve done so far, so updates will slow down as I first have to develop things before I write about them :-)

See you next time.

You May Also Enjoy

In my previous post I talked about data hot-reloading and its implementation inside my game engine. Today it’s time to tackle code hot-reloading, i.e. the po...

I’ve been fiddling around with Rust for some months now, with the intent of learning more about both Rust itself and game/engine programming. The result is a...

A new release of BOOM: Remake is out, fixing several Teleporter issues and improving the Preferences screen.

A new patch for BOOM: Remake is available, fixing various bugs and adding Fullscreen mode to the game!