This page hosts a free fan-remade version of the game BOOM.

BOOM was a shareware game for MacOS created by Federico Filipponi (FactorSoftware) in the ’90s. The game’s slogan was “Bomberman meets DOOM”: you could play solo or in local coop throughout 80 levels, facing a plethora of different enemies, intermediate bosses and a final Big Alien Boss. 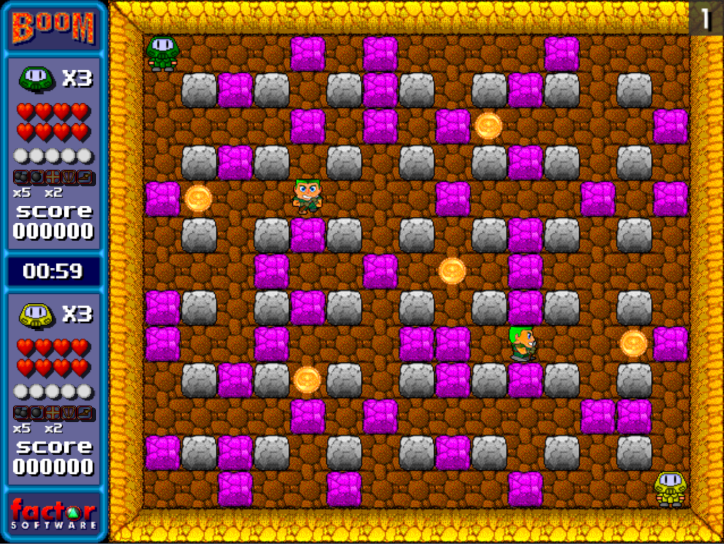 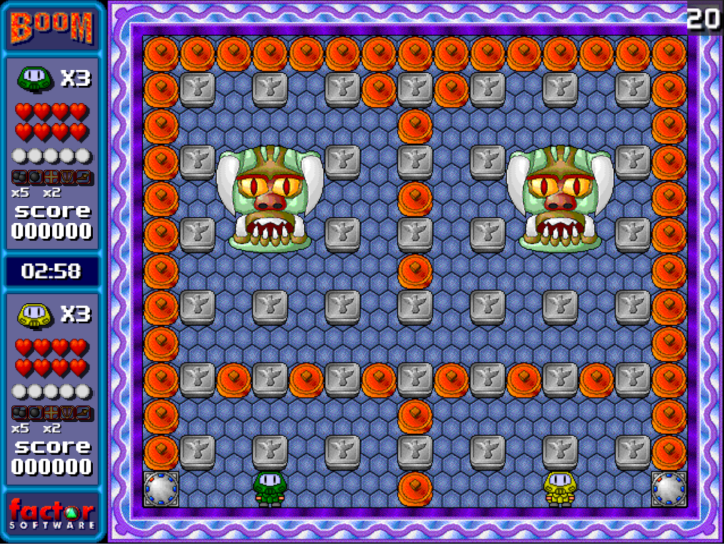 Unfortunately, the game’s original site is not accessible anymore, so BOOM can only be downloaded from archives found on the Internet.

I played BOOM a lot, since when I was a kid, and it is the game that made me venture on the game developing path. Maybe, if it weren’t for that game, I wouldn’t be developing games at all nowadays.

For this reason, in 2015 I decided to start working on a complete remake for the game. That project would eventually become Lifish. But alas, making a game is hard and takes a lot of time, so Lifish still isn’t complete yet.

However, as most of the code is there, I figured in the meantime I could work on a mod that, changing a bit of gameplay logic and borrowing assets from the original game, could effectively become a faithful remake of BOOM! So there it is, a game as close to the original Factor Software’s BOOM, playable on Windows, Mac and Linux completely for free!

Note: BOOM: Remake shares most of its codebase with Lifish and, like it, it is free software. The source code is available here under the branch boom.

DISCLAIMER: all graphics and audio assets in the game belong to Factor Software. This game is a remake distributed free of charge with the aim to preserve the original game from obsolescence. If you are the owner of BOOM assets and want this game to be taken down, contact me at silverweed1991@gmail.com

An experimental level editor is available, currently in packaged version for Mac only. It can be compiled for Linux as well, but unfortunately there is no Windows support, due to the Crystal programming language not supporting it.

There is also a random level generator available, working for both the original BOOM and BOOM Remake. It requires Python 3 to run.